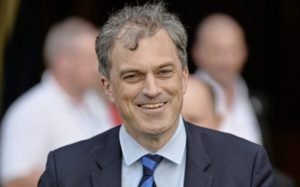 JULIAN Smith’s sacking as secretary of state just a month after he helped broker the return of Stormont has been met with dismay from nationalists, unionists and the Irish government. Taoiseach Leo Varadkar praised the Tory MP as “one of Britain’s finest politicians of our time” for helping to restore a power-sharing government, his work on Brexit and his support for the extension of same-sex marriage to Northern Ireland. He was also praised by the survivors of institutional abuse for helping secure long-awaited legislation to give victims compensation. The 48-year-old was sacked by Prime Minister Boris Johnson in yesterday’s cabinet reshuffle after less than eight months in the post. It is understood the sacking came amid disquiet that the Remain-backing MP had broken ranks in October to warn that a no-deal Brexit would be “very, very bad” for Northern Ireland. There was also speculation that Mr Johnson is unhappy at commitments in the New Decade, New Approach agreement to bring forward proposals on the legacy of the Troubles within 100 days. Some Tory MPs believe the commitment will undermine what they see as the need to end prosecutions of British soldiers who served during the conflict. Mr Smith yesterday drew praise from across the political spectrum, including DUP leader Arlene Foster and SDLP leader Colum Eastwood.