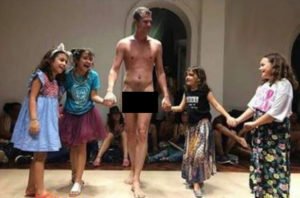 (NOTE: Most of the articles linked within are in Portuguese from Brazilian media. The images and video contained here may be disturbing.)

Powerful institutions in Brazil are force-feeding that nation’s young on pornographic images, and many angry Brazilians have reached their limit. A headline in the New York Times was as innocuous as possible given the subject: “Brazilian art show sets off dispute that mirrors political battles”. The one in the UK Daily Mail following a subsequent “exhibition” was a bit more difficult to water down: “Fury as a girl, four, is encouraged to touch a naked man in Brazilian art exhibition as politicians call on judges to prosecute the artist”. As could be expected, neither article was able to tell the full story of the depravity of each production, nor did they fully capture the emerging fury of a Brazilian populace that is tired of seeing the results of an overly sensualized culture and the hypersexualized status quo. The stage for both these events, and others in between them, seemed to be set in place two months ago by a seemingly unrelated yet no less controversial media event, again aimed at kids. Here begins the timeline up to September 29th of this year: LEES VERDER OP AMERICANTHINKER.COM