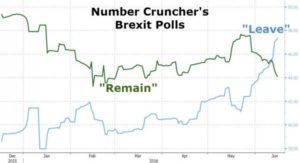 This was before The IMF unleashed their own version of “we are all doomed” and before Ms. Cox was murdered. The sad death of pro-EU British MP Jo Cox prompted a buying spree in Sterling that carried on through today as hope sprung eternal that her assassination (and the efforts to politicize the actions of a mad man) would lead to either a delayed vote or sympathetic pro-EU “Remain” swing. JPMorgan hinted before the close that was not the case and now, as USA Today reports, the first post-Cox poll reveals a shocking swing in “Remain” voters… British support for remaining in the European Union has weakened in the wake of the murder of the pro-EU politician Jo Cox, according to an online research company Friday. Qriously, a London-based technology start-up that gathers data and intelligence about consumers through mobile phone apps, found that backing among likely voters for Britain’s EU membership has dropped to 32% from 40% before her death. LEES HET HELE VERHAAL OP ZEROHEDGE