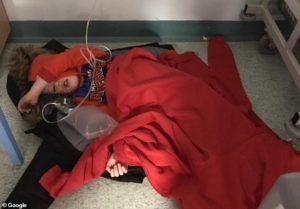 Boris Johnson bizarrely took a reporter’s phone and put it in his pocket today after refusing to look at a photograph of a sick four-year-old boy who was forced to lie on a hospital floor. The PM took evasive action despite apologising to the family of Jack Williment-Barr, who was taken to Leeds General Infirmary by ambulance last week with suspected pneumonia. As there were no beds and the department was experiencing its busiest week since 2016, he was left lying on a pile of coats in a clinical treatment room, attached to an oxygen mask. The child was later diagnosed with flu and tonsillitis. Speaking on the election trail in the north of England today, the Prime minister said sorry and pointed to the huge investment being pledged by the Tories.

The image highlighted the state of the NHS. one of the few areas where Labour is viewed as more trusted than the Tories. As mr Johnson’s slip-up dominated the day’s news, health secretary Matt Hancock was dispatched to Leeds General Infirmary to contain te row. Labour has consistently highlighted the faltering health service during the election campaign and the NHS has become an important issue for voters, outstripping Brexit in some polls.